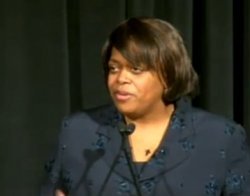 Religious freedom advocates say post has been vacant too long

The cause of religious liberty has a new champion following a vote April 14 in the United States Senate confirming Baptist minister Dr. Suzan Johnson Cook to the post of Ambassador-at-Large for International Religious Freedom. President Barak Obama named the prominent author and speaker in June 2010 as his choice for top religious freedom diplomat, but Dr. Cook’s nomination initially stalled after one senator placed a hold on the process. President Obama re-nominated her in February this year.

Dwayne Leslie, deputy secretary general of the International Religious Liberty Association, said he’s delighted by Dr. Cook’s confirmation. “Given the current unrest in the Middle East, including the recent increase in violence against Christians and other religious minorities, it’s critically important that the US Government have the Ambassador-at-Large in position to fight for the protection of international religious freedom,” said Leslie. “I look forward to working with Dr. Cook as she steps into her new role.”

Dr. Cook was the keynote speaker earlier this month at the IRLA’s annual Religious Liberty Dinner in Washington, D.C. Speaking to more than 200 ambassadors, government officials, and religious liberty advocates, she spoke passionately about recent abuses of religious freedom and about her desire to be a strong advocate for those who suffer discrimination or persecution because of their faith. Quoting Dr. Martin Luther King Jr, she said the path to living in peace with others involves learning to “listen to and learn from others,” especially those who think differently to ourselves.

As the United States' top diplomat for religious freedom, Dr. Cook will track international trends for the State Department, advise the government regarding how these issues intersect with US foreign policy, and engage in diplomacy aimed at strengthening protection for religious liberty around the world.