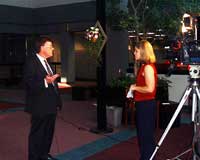 "With the detention of aid workers on charges of encouraging conversion to Christianity illustrate the challenges to religious freedom posed by the Taliban regime in Afghanistan," Gallagher stated. "This is just another instance of the repressive control of religious matters in the country, and follows an earlier edict that imposes the death penalty on those who convert from Islam."

In addition, the regime has also targeted minorities, requiring them to wear distinguishing labels in a manner that has invited comparison to Hitler's treatment of the Jews. Earlier this year the destruction of ancient Buddhist statues also brought worldwide condemnation.

"This interview provided a useful opportunity to highlight ongoing religious freedom concerns that are totally in opposition to the clear requirements of the Universal Declaration of Human Rights," Gallagher concluded. "The target audience of this programming is high school students, and such examples well illustrate the vital need to monitor and highlight such flagrant violations. The cause of religious liberty demands that we speak out and defend the fundamental right of freedom of conscience."