December 16, 2003. "It is not right that Christians and Muslims are killing each other in Ambon," said Dr. H. Marasabessy, a Muslim and the state religion minister for the Maluku region of Indonesia, during a meeting with two Adventist church leaders. "After all, we worship the same God."

Dr. Marasabessy discussed the challenge of peacemaking with Dr. John Graz, general secretary of the Christian World Communions and of the International Religious Liberty Association, and Lincoln Steed, editor of Liberty magazine. The official quoted the admonition of Jesus Christ that we "love one another," as a workable answer. 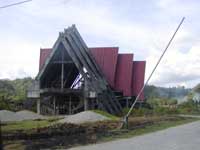 The visit to Ambon came in late November at a time of truce after nearly three years of vicious bloodletting, during which up to 6,000 Christians and Muslims were killed and thousands of homes burned. The government of Indonesia, a nation of 212 million people of which 80 percent are Muslims, had sealed the area under a state of emergency until September of last year. 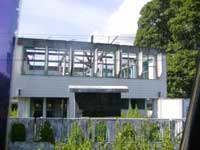 The visit by Graz and Steed was one of the first by religious liberty leaders from outside the country, apart from a visit earlier in the year by Hissiah Missah, and Indonesian and religious Liberty leader in Manila, Philippines. 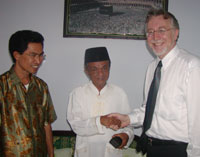 Graz and Steed found an area devastated by conflict. They saw the burned-out State Pattimura University and a sad mosaic of burned villages, both Christian and Muslim. In downtown Ambon, the provincial capital of about 300,000, were many burned buildings, including the police headquarters.

Graz, Steed and Missah met with synod general secretary Reverend S.J. Mailoa and moderator Dr. I.W.J. Hendriks. The group also met in a Muslim neighborhood at the home of Deputy Mayor Sari Hadler, who stated that he is working closely with the synod to "heal our community." (ANN)