On May 25, 2013, in Sao Paulo, Brazil, history was made as 30,000 people gathered in the Vale do Anhangabaú to say thank you to God and thank you to Brazil for religious freedom.  It was the largest outdoor rally for religious freedom ever held in a city. During this event the authorities of the City of Sao Paulo announced that May 25 had been voted by the City Council as the annual Religious Freedom Day.  That all happened during the second World Festival of Religious Freedom. 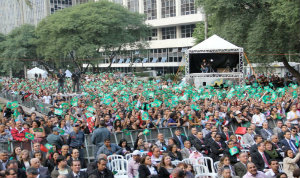 The program began on Wednesday, May 22, with the International Symposium on Law and Religious Freedom organized by the Bar Association of Brazil.  On May 23, an International Forum for Religious Freedom was held at the hall of the Legislative Assembly of the state of Sao Paulo. Among the speakers were Professor Cole Durham, Dr Ganoune Diop, and Dr Brian Grim, Senior Researcher at the Pew Research Center’s Forum on Religion and Public Life. This was followed by a meeting with Cardinal Odilo Scherer, Archbishop of Sao Paulo.

On Friday evening a great liberty concert was performed by an orchestra, choir, and various musicians at the Adventist University of Sao Paulo. On Saturday morning all Seventh-day Adventist churches in Brazil focused the sermon on the theme of religious freedom. The climax of the festival was a large gathering held in the Vale do Anhangabaú on Saturday afternoon. In every meeting speakers and representatives of various religious organizations were part of the program, and these religious leaders were introduced to the public during the large afternoon event.

The Church of Jesus Christ of Latter-day Saints sent a sizable group of attorneys and other religious liberty experts to the four days of meetings. Cardinal Odilo Scherer sent a representative who, along with many other religious leaders, was part of the large gathering.

The IRLA collaborated with its Brazilian partner association, ABLIRC (The Brazilian Association of Religious Liberty and Citizenship), to co-sponsored the event. Together we have worked to promote it since 2002, and more specifically since 2010, following the first World Festival held in Lima, Peru.  Edson Rosa, the IRLA Secretary General for South America, played a significant role in the promotion of the first festival, and he was the key organizer of the second one. He worked with the support of Attorney Alcides Coimbra, Secretary General of ABLIRC, and Samuel Luz and his team.  They were assisted by the Religious Liberty Commission of the Brazilian Bar Association’s São Paulo Division (OBA) and its President, Attorney Damaris Moura Kuo. 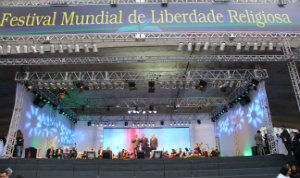 Festivals have contributed to the promotion of religious freedom by gathering large numbers of people to think about the special gift of freedom which has been given to them by God and by their country.  The first mega festival was held in 2006 in Sao Paulo, where 12,000 people filled an indoor stadium.  This was soon followed by festivals on five continents. The two largest ones were held in stadiums in Luanda, Angola (2008) and in Lima, Peru (2009). At least ten more festivals are planned before the end of 2014. It is expected that three of them will have more than 20,000 attendees.

I send my congratulations to the organizers of the second World Festival, and especially to the IRLA Secretary General for South America, Pastor Edson Rosa. I also send my thanks to Brazil and Sao Paulo for protecting religious freedom for all. I hope Brazil will become a voice on the international stage speaking on behalf of the persecuted.

My only regret is that I was not able to attend this great event because of a family health emergency.  I want to thank the Ordem dos Advogados do Brazil, Secao de Sao Paulo, and its President Dr Marcos da Costa, for the certificate he gave me in absentia.