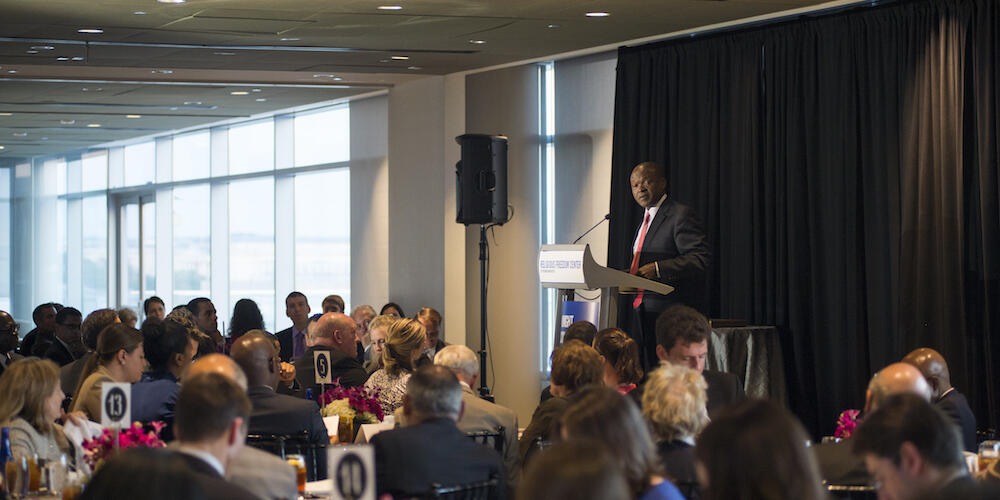 Erastus J.O. Mwencha, Jr., deputy chairman of the African Union, told a group of Washington D.C.’s policy makers and thought leaders, gathered for the 14th annual Religious Liberty Dinner, that there’s no room for complacency when it comes to defending religious freedom. Citing examples of increasing sectarian unrest and religious persecution, Mwencha said, “We must take a firm stance—not simply look back on how far we have come, but ‘press forward to the mark.’”

Mwencha, who has helped lead Africa’s top pan-national organization for the past eight years, described the state of religious freedom in Africa as a “paradox.” On one hand, there has been a rapid expansion in religious diversity on the continent, but there has also been a lag in legal protection for freedom of worship in many African jurisdictions.

In his wide-ranging speech, Mwencha described the tragedy wreaked by the Islamic extremist group Boko Haram in West Africa, where some 40,000 people have been killed and some 2.1 million displaced from their homes. He also spoke of increasing tension in Egypt between Muslims and Coptic Christians, and the 2011 separation of Sudan and South Sudan—a redrawing of the political map of Africa driven in large part by religious differences.

Mwencha, a member of the Seventh-day Adventist Church who has spent more than three decades in leadership roles at various Pan-African organizations, also spoke about his personal stake in the cause of religious freedom. He said his own experience as a member of a minority religion in the public realm had tested his convictions and allowed him to better gauge the progress made in Africa and globally in protecting religious liberty.

“From an early stage in my career, I vowed not to compromise on my religious convictions, including keeping the Sabbath,” said Mwencha. Although this stand sometimes put him at odds with his colleagues and superiors, Mwencha said that “standing firm has allowed me to demonstrate to others the importance of staying true to one’s beliefs. It has also shown me how people can be inherently good and understanding in allowing each other to practice their religion freely.”

In a brief speech to attendees, Ganoune Diop, director of Public Affairs and Religious Liberty for the Adventist world church and Secretary General of the International Religious Liberty Association, sought to explain why the church continues to commit significant resources to promoting freedom for people of different faiths, or of no faith at all.

Diop called freedom of religion or belief “one of the most profound expressions of what it means to be human,” and a “right to self-determination regarding one’s deepest identity.” He warned that the concept of religious freedom shouldn’t be reduced to the one-dimensional idea of just “freedom to believe or to worship.” Instead, Diop said, it is a multi-faceted, foundational freedom that supports many other civil freedoms.

Melissa Reid, executive director of NARLA, has been one of the key organizers of the event for more than a decade, and she says the dinner has become a Capitol Hill tradition. “These are individuals—public officials, political leaders, representatives from faith groups and advocacy organizations—who, in the regular course of business in Washington, would rarely come together. Yet each year they meet here to acknowledge and celebrate religious freedom as one of our nation’s most fundamental civic values.”

Reid said that, for her, a highlight of this year’s dinner was the attendance of some 50 NARLA guests from across North America, including attorneys, religious liberty directors, and interested lay people, who came to Washington to see religious liberty advocacy efforts first-hand.

Two people were honored at this year’s dinner for their work in advancing the cause of religious freedom. David Lopez, General Counsel for the US Equal Employment Opportunity Commission, received the National Award for Religious Freedom for his “outstanding and consistent advocacy of civil rights, religious rights, and employment rights throughout a remarkable legal and government career of service." Lopez heads the Commission’s litigation program nationwide, and oversaw the progress of the EEOC’s religious accommodation suit decided last year by the Supreme Court—EEOC v. Abercrombie & Fitch Stores, Inc.

In that case—in which the Adventist Church also filed an amicus, or “friend of the court” brief—a teenager named Samantha Elauf was denied a job as a sales assistant in a fashion store because she wore a traditional Muslim scarf, or hijab. In one of the final decisions written by Justice Antonin Scalia before his death, the Supreme Court held 8-1 that the employer had unlawfully discriminated against Samantha on the basis of her religion.

In accepting his award, Lopez gave a moving account of Samantha’s courage and tenacity in publicly standing up for her right to religious accommodation in the workplace.

Also honored was Brian Grim, who received the International Award for his work to educate businesses and governments on the economic benefits of protecting religious freedom. In 2014 Grim left his position as a lead researcher at the Pew Research Center, to become founding president of the Religious Freedom & Business Foundation. The organization is founded on the proposition that “religious freedom is good for business and business is good for religious freedom.”

Over the past two years, Grim has launched a series of worldwide initiatives, including the so-called “Corporate Pledge in Support of Freedom of Religion or Belief” which encourages businesses to commit to robust religious accommodations for their employees.

In his acceptance speech, Grim spoke about his partnership with Adventists in promoting religious freedom in many different places around the world, and he thanked the church for its advocacy work.

The Religious Liberty Dinner came after a day-long International Religious Liberty Summit, also held at the Newseum. This event was co-sponsored by the Adventist Church and the Newseum’s Religious Freedom Center. Summit organizer Dwayne Leslie, an associate director for Public Affairs and Religious Liberty for the Adventist world church, says his goal was to bring advocacy groups together to find ways to better engage government leaders and the media, and to mobilize efforts on behalf of persecuted religious minorities around the world.