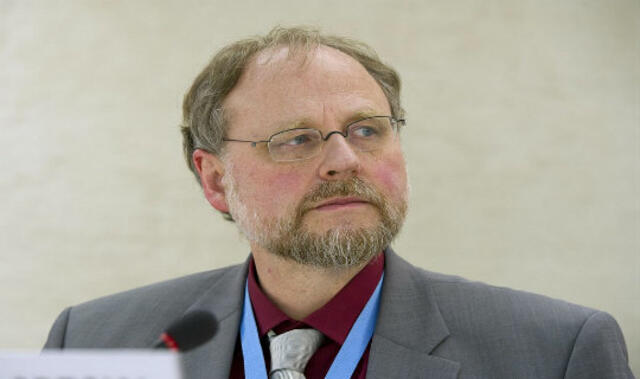 UN Update: Religious Freedom and the Rights of Children and Parents

José I. Ortiz, IRLA’s assistant UN liaison, reports on a round of events at the United Nations in New York surrounding the presentation of an interim report by Heiner Bielefeldt, UN Special Rapporteur on Freedom of Religion and Belief.


With the autumn season in full swing in New York, the General Assembly’s Third Committee begins the heart of its work at the United Nations (UN) Headquarters. The Third Committee is responsible for the UN’s social, humanitarian, and cultural matters. Special rapporteurs commissioned by the UN to study and report on the many and varied Human Rights subtopics descend on New York to deliver their findings.

On Thursday, October 22, Heiner Bielefeldt, UN Special Rapporteur on Freedom of Religion and Belief, gave a brief statement to the General Assembly’s Third Committee presenting his latest interim report. This report’s thematic focus is “on the rights of the child and his or her parents in the area of freedom of religion and belief.”

In his remarks before the Third Committee, Prof. Bielefeldt addressed the grim reality that the rights of parents and their children to practice the religion of their choice are all too often violated around the world. He gave the “extreme example” of child abduction in various places around the globe where “girls from religious minorities” are taken from their parents, forced into early marriage and conversion. Prof. Bielefeldt pointed out this violates both the rights of the child, and her parents, because it deprives them of the right to raise their child in their religion of choice.

Using his recent visit to Bangladesh as an example, he pointed to the country’s relatively liberal policy on religious education in government-funded schools. Children are taught Islam—90 percent of the population is Muslim—unless the child is of a different religion. In that case, the child has the right to ask for religious instruction in his or her own religion. This does not always work well because Muslim teachers are often asked to teach a child about a religion that the teacher knows little about. While Prof. Bielefeldt praised the intentions behind a policy such as this, he cautioned that religious minorities will inevitably have a different experience to that of the majority.

Prof. Bielefeldt contrasted the situation in Bangladesh with that of France. A policy was instituted in French schools under the banner of “egalité” (equality), one of the three pillars of the French Revolution. Under this policy, children would not be served different meals in schools based on their religious dietary needs. According to Prof. Bielefeldt, this is a clear violation of the rights of children, and the rights of their parents to raise their children on foods consistent with their religious beliefs.

In both his report and at the panel discussion, Prof. Bielefeldt emphasized the fact that the religious rights of children and their parents do not exist in isolation of all other human rights, stating, “They are connected in context to other human rights.”

When asked about the age at which it would be appropriate for a child to begin making his or her own decisions on religion, the Special Rapporteur gave a very practical answer. Because there is no answer to this question in law, he suggested that “persuasion is much more effective” than coercion once a child becomes a teenager.

Generally, Prof. Bielefeldt’s report highlighted the principle that the state should never have the authority to decide a child’s religion, but that parents are unique caretakers of this responsibility. Because of this, family law reforms are required in most countries around the world to ensure this right is protected, especially in cases of divorce and other matters where the state is asked to rightly intervene. [José I. Ortiz, JD]

Photo credit: Photo by Violaine Martin. Heiner Bielefeldt, Special Rapporteur on Freedom of Religion and Belief during the 22nd Session of the Human Rights Council 2013.