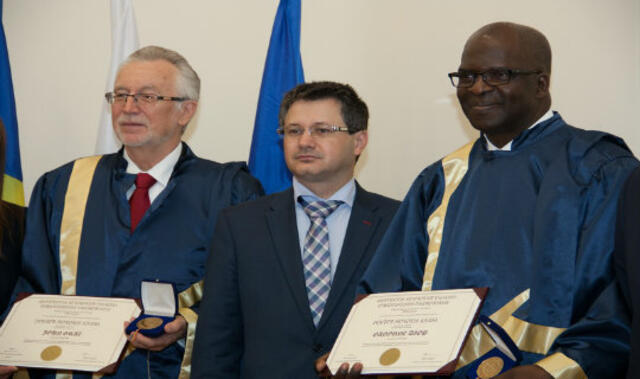 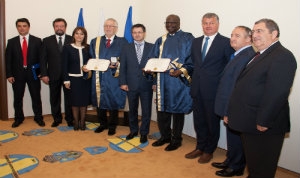 On October 23, the Wallachia University of Targoviste honored IRLA Secretary General Dr. John Graz and IRLA Deputy Secretary General Dr. Ganoune Diop with the title of Doctor Honoris Causa. The University Senate voted to express their appreciation for the work of the IRLA and their defense and promotion of religious freedom and human dignity around the world. The Wallachia University is one of the new universities of Romania. With 7,000 students, it is a growing academic center.

Present at the event, were a number of students, several Rectors of Romanian universities and Dr. Mihnea Costoiu, the Minister Delegate for Higher Education, Scientific Research, and Technological Development.  Dr. Costoiu called the IRLA Secretary General “a global visionary who inspires and builds suitable solutions for governments and international diplomacy.”  Dr. Diop was congratulated for his theological work on Human Dignity.

The Wallachia University holds an Orthodox Faculty of Theology and the fact that recipients of the Doctorates were Adventists is a great sign of openness and respect for other religious convictions. 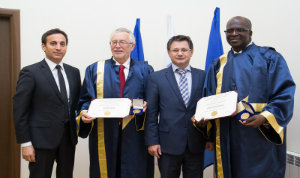 Following the Second International Conference in Bucharest, this event is one of the results of the outstanding work of Dr. Nelu Burcea, President of “Conscience and Liberty”, his team and the support of the Romanian authorities.