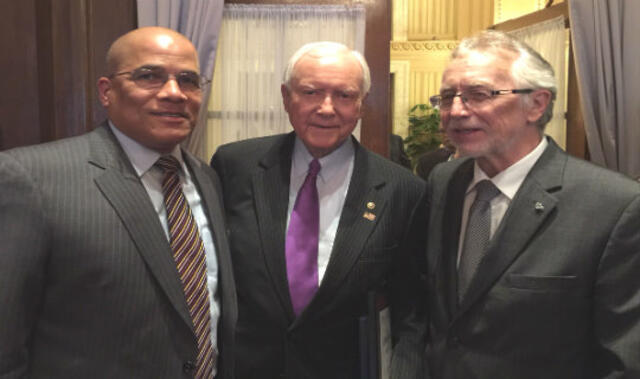 Thank you so much for inviting me to be with you tonight. I am humbled to be included on the list of distinguished speakers at this event who have made such a difference for people all over the world.

The National Archives building is about seven blocks from here. It houses historical records and documents that tell the story of the most significant freedoms we cherish as Americans. In fact, when Americans think of liberty, we often think of particular documents such as the Constitution. Two statues stand in front of the Archives building, and below one of them are the words eternal vigilance is the price of liberty.

No liberty requires more vigilance today than religious liberty. This is a time of turmoil for religion and religious freedom, both here in America and abroad. Our experience shows that, even blessed with a long and rich heritage of religious freedom, this freedom can be suddenly at risk. Long before America’s founding, religious communities came to these shores to freely live their faith. Professor Michael McConnell writes that by the time the Bill of Rights was ratified in 1791, “the American states had already experienced 150 years of a higher degree of religious diversity than had existed anywhere else in the world.” America’s founders viewed religious freedom as preeminent among fundamental rights and made the free exercise of religion the first freedom protected in the Bill of Rights.

But then, in its 1990 decision in Employment Division v. Smith, the Court reversed that progress and said that the First Amendment protects only against government action that explicitly or intentionally burdens religious practice. According to Smith, the free exercise clause provides no protection against generally applicable laws and regulations, no matter how they might impact religious practice. The scholarship, commentary, and analysis of this decision could fill entire shelves in a law library. I raise it tonight because it also stands for a much simpler and more dangerous proposition, that there is nothing special about religious freedom. Under the Court’s decision in Smith, government complies with the First Amendment so long as it treats religious practice no worse than anything else.

Congress responded to Smith by enacting the Religious Freedom Restoration Act, or RFRA, to protect religious freedom by statute the way it once had been protected by the Constitution. RFRA says that government may substantially burden the exercise of religion only if that burden is the least restrictive means of furthering a compelling government purpose.

I have here the letter sent in October 1993 from the Coalition for the Free Exercise of Religion urging Senators to support this legislation. It lists more than 60 organizations as coalition members, and two of those groups stand out to me as I look at the list tonight. The Seventh-day Adventist Church and the Church of Jesus Christ of Latter-day Saints were key players in the effort to, as the letter states, restore religious liberty for all Americans. Within three weeks of this letter, the House of Representatives passed the legislation without objection, the Senate passed it by a vote of 97-3, and President Clinton signed it into law.

The Religious Freedom Restoration Act boldly asserts that there is something fundamental and special about religious freedom. In 1997, the Supreme Court again restricted protection for religious freedom by saying that RFRA protects religious freedom only against actions by the federal government. Just as Congress had done in 1993 after the Smith decision, states responded to this decision by enacting state-level versions of the Religious Freedom Restoration Act. Once again, the Seventh-day Adventist Church led the way. The Church’s press release when Arizona enacted its law in May 1999 says that “many religious organizations have laid aside ideological differences to join together in promoting the principle of religious freedom for all Americans.”

Today, however, the principle that religious freedom is a fundamental right that must be given special protection is once again being challenged, in several different ways. The first is broadly cultural. In the last decade, the percentages of people who see religion losing its influence on American life, who believe that religion is out of date, and who have very little or no confidence in organized religion have all risen sharply. Fewer and fewer Americans consider religion and, therefore religious freedom, to be something special.

The second way religious freedom is being challenged is legal in nature. In 2012, the Equal Employment Opportunity Commission argued in the Supreme Court that the First Amendment provides no more protection for a church, even in choosing its own ministers, than the First Amendment does for a labor union or a social club. The message again seemed to be that the practice of religion is nothing special. This time the Supreme Court unanimously rejected what it called a remarkable, untenable, and extreme position. The First Amendment, the Court said, “gives special solicitude to the rights of religions organizations.”

This is also a troubling time for religious freedom around the world. Religious freedom is not an American innovation, nor is its protection only an American concern. In his 1941 State of the Union Address, President Franklin D. Roosevelt included the right of every person to worship God in his own way as one of four essential human freedoms. Just four years later, after the end of World War II, the United States joined dozens of other nations in signing the Universal Declaration of Human Rights, which includes religious freedom as one of the inalienable rights of all members of the human family.
It is important to articulate what we mean by the inalienable right of religious freedom. Article 18 of the Universal Declaration states that this right includes “freedom, either alone or in community with others and in public or private, to manifest…religion or belief in teaching, practice, worship and observance.” Real, meaningful religious freedom includes belief and behavior, in private and in public, individually and collectively.

The last several U.S. Presidents have issued a proclamation each January marking Religious Freedom Day. President Obama, for example, has called religious freedom a universal and natural human right. Similarly, President George W. Bush declared that no human freedom is more fundamental than the right to freely practice our religious beliefs. And President Clinton said that religious freedom is a fundamental human right and essential to our dignity as human beings.

That truth, however, is not the reality in much of the world today. According to the Pew Research Center, more than three-quarters of the world’s population live in places where restrictions on religion, including both social hostilities and government restrictions, are high or even very high. The annual reports of the U.S. Commission on International Religious Freedom show that, in the last decade, the number of countries receiving the designation as being of particular concern with regard to religious liberty has doubled and the number of countries with serious violations of religious freedom has risen by two-thirds.

Some attacks on religious practice and religious freedom make headlines. In Nigeria, Boko Haram has been waging a terror campaign since at least 2003. The group is often referred to locally as the Nigerian Taliban, and its name in the local dialect means Western education is forbidden. The group refuses to participate in Nigeria’s political system and has condemned government workers, including Muslims, as infidels. In the last five years, it has attacked prisons and robbed banks, bombed dozens of churches, and killed or kidnapped thousands of innocent men, women, and children.

But attacks come also from government itself. Tajikistan prohibits anyone under the age of 18 from participating in public religious activities. In China, house church Christians have been sentenced to years in prison simply for recording and copying sermons. Saudi Arabia prohibits the public practice of any religion other than Islam. Russia uses its law against what it calls extremism to restrict and control the activities of minority religions and makes it illegal for foreigners to participate in religious organizations. A pastor in Iran, a U.S. citizen, was sentenced to eight years in prison for his involvement in the house church movement because, according to the Iranian government, this work threatens national security.

These developments are troubling in and of themselves, but consider this: The Pew Forum identifies 54 nations as imposing high or very high government restrictions on religion. Forty-three of those nations, including each one I just mentioned, have nonetheless ratified the International Covenant on Civil and Political Rights. That treaty obligates nations to guarantee religious freedom, specifically defined as the Universal Declaration defines it — as the right to religious belief and practice, individually or in community with others, in public or in private.

Religious freedom must also be seen as comprehensive in application to all people. It is a universal, human right. I mentioned the Universal Declaration of Human Rights and the International Covenant on Civil and Political Rights. The United Nations has by consensus reaffirmed these principles in 1981, in 2000, and most recently in 2008.

Religious freedom must also be seen as comprehensive in its effects. America’s founders spoke about religion’s role in helping to make good citizens. The Massachusetts Constitution in the 18th century and Alexis de Tocqueville in the 19th century associated religion with general happiness, good order, civil government, and well-functioning political institutions. More recently, this topic has been the subject of conferences and a growing body of scholarship across disciplines. Professor Mary Ann Glendon of Harvard Law School, for example, has argued persuasively about how violence tends to be greater in societies that suppress religious freedom and that religious freedom correlates with democratic longevity. In its 2014 annual report, the U.S. Commission on International Religious Freedom described how religious freedom can benefit a society politically, economically, civically, and socially.

Religious freedom cannot be simply an idea, a topic, or a theory. Nor can religious freedom protect itself. Earlier I described how, for more than a century, our Supreme Court had moved toward both broader application and stronger protection of religious freedom. All it took to reverse that progress was a slight modification in interpretation.

Genuinely protecting rights such as religious freedom requires more than signing a declaration or ratifying a treaty. Dozens of nations have ratified the Covenant on Civil and Political Rights and yet impose significant restrictions on religion. I realize that many complex factors combine to influence whether the protection of religious freedom in a particular nation is even rhetoric, let alone reality. But public commitment is important, and steps such as ratifying the Covenant, including protection for religious exercise in a constitution, and providing for its protection by statute are all important steps in this direction.

Let me close by saying that there is no more noble cause than establishing and defending religious freedom. It truly is essential to our dignity as human beings and is an inalienable right that comes not from government, but from God. Eternal vigilance is the price of liberty, and no liberty is more worth the price. Thank you for letting me share this time with you tonight.