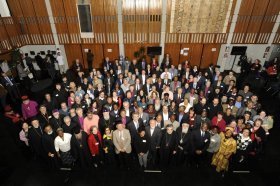 The Central Committee of the World Council of Church (WCC), the world’s largest ecumenical organization, met February 16 to 22 in Geneva to discuss current issues facing Christianity. Yet according to Dr. John Graz, IRLA Secretary-General, the committee has lost a significant opportunity to discuss pressing issues of religious freedom, including a worldwide upswing in religiously motivated persecution of Christians.

Dr. Graz, who attended the first three days of the six-day event, said that it is impressive to see so many Christian leaders speaking strongly for justice and peace, and underlining the right of minorities. “But I regret,” he said, “that in a meeting such as this the persecution of Christians around the world and the imperative of religious freedom were not mentioned from the platform more frequently.”

“While the IRLA commends the WCC for its commitment to justice, peace and human rights, we would also encourage it to do more to promote, openly and strong, religious freedom which is under threat in so many places around the world.”

Graz said that attending such a meeting gives many opportunities to meet religious leaders from many different parts of the world. “I was delighted to talk with Christians from Sudan, Middle East, Sri Lanka, Indonesia and many other places.”

Graz describes the meeting as “very open” with a lot of discussion and interaction. “Divisive issues were not on the agenda but justice and peace were prominent themes in the presentations,” reported Graz.

Graz said the upcoming International Convocation for Peace to be held in Jamaica in May this year generated a great deal of interest among participants, as did a report given by a delegation of Christian leaders from Iraq.

The WCC represents about 25 percent of the world’s Christian population and 349 churches. While a majority of mainline Protestant and Orthodox churches are members, most Evangelical and Pentecostal churches are not. [IRLA Staff]