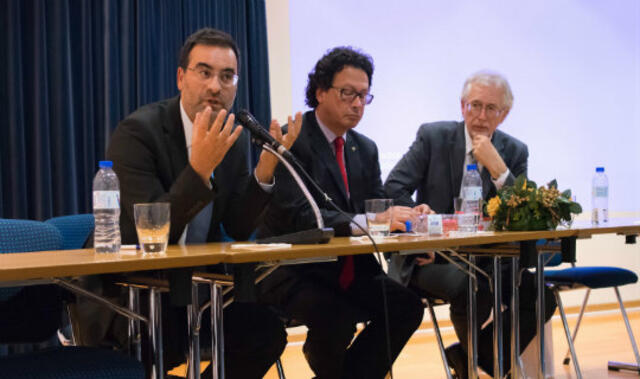 Recent trends in religious freedom, and how these are portrayed within the mainstream media, were the focus of the 4th Conscience and Liberty Conference held this week in Lisbon, Portugal. The one-day event took place October 20 on the campus of Universidade Lusófona, the country’s largest private university, and drew scholars, advocates, and religious leaders. Fernando Soares Loja, president of the Religious Liberty Committee of Portugal’s national Assembly, chaired the conference.

Dr. John Graz, recently retired Secretary General of the International Religious Liberty Association was one of the keynote speakers. He gave a global overview of the state of religious liberty around the world, explained major developments from the past two decades, and highlighted current challenges.

Journalist and scholar Mr. Joaquim Franco gave the second major presentation of the day. He provided an in-depth analysis of how the media portrays religion, and the implications of this for building public awareness and understanding of religious freedom.

The event closed with the recognition of two individuals who have made significant contributions to the cause of promoting and protecting religious freedom. The organizers honored John Graz for his efforts spanning more than 20 years in defending religious freedom around the world.

The 2015 Conscience and Liberty Review Award was given this year to Brazilian scholar and author Dr. Josias Jacintho Bittencourt for his work entitled, “Secular State and Religious Freedom: Realities and Utopias.” Dr. Bittencourt argues in his book that “tolerance, dialogue, and law based on the ideals of justice, are the best instruments” for calibrating the relationship between religion and state.

The event was sponsored by an IRLA affiliate—the International Association for the Defense of Religious Liberty (IADRL)—and was organized by its president, Paulo Sergio Macedo. [Paulo Lima, editor, Portuguese Adventist Review]