Santiago de Compostela, Spain… Under the auspices of the United Nations and UNESCO, the famous historical city of Santiago de Compostela in the province of Galicia, Spain, hosted the world Conference on Peace, Solidarity and Development from March to May 2005. Dr. John Graz, Secretary General of the IRLA was invited as speaker to the special international congress on "Religion, Dialogue, Solidarity and Development" held May 25-27.

"This high-profile international event brought together a wide range of experts and supporters of religious freedom and human rights," Graz observes, adding that "it was a privilege to be part of such a meaningful and important congress."

Graz's lecture focused on the obstacles to the inter-religious dialogue. "The congress was a great opportunity for experts to share the results of their researches and experiences and their hope. IRLA experts Professor de Hera and Professor Rosa Maria Martinez de Codes were the main organizers of the congress." [IRLA News] 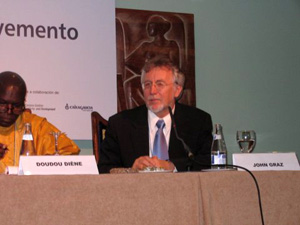 Dr John Graz at the Congress 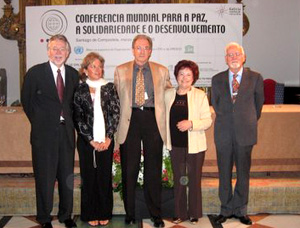