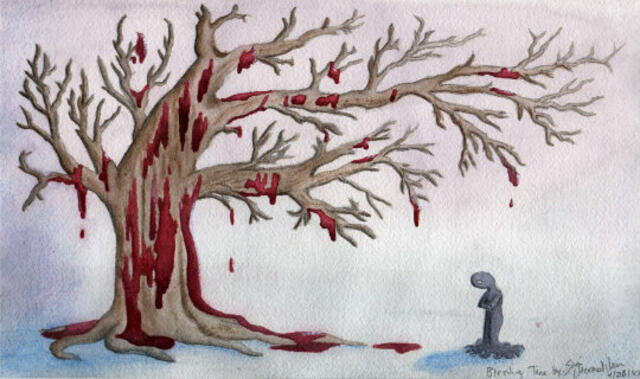 If a Tree Falls… Does Bloodshed Matter When It’s Not Reported?

It’s an old philosophical question: “If a tree falls in the forest, but no one is there to hear it, does it make a sound?”
This kind of question has sparked deep thought and debate over the relationship between sensory perception and reality.

The question I have sounds similar, but because of the serious nature of the subject I hope it sparks more than mere reflection. The question is this:

If a drop of blood falls to the ground—blood shed by senseless violence, or worse yet, by religiously inspired hatred—but there are no cameras and reporters there to report it, does it mean that the life has no value?

If this question offends you, at least I know you’re listening.

We live in a world where there is as much competition for our emotions as there is for our attention. Just as the Twentieth Century began in the hum of the industrial economy and ended in the glow of the information economy, keen observers have already marked the Twenty-first Century as the age of the attention economy.

Knowing that we are already overwhelmed by the number of devices, gadgets, streams and outlets vying for our attention, smart storytellers understand that capturing our attention alone is not good enough. The important stories hold our attention—and they do so by moving us, by stirring our emotions, by making us care.

So our emotions have become a commodity, a valuable one, but a commodity nonetheless. And like other precious resources, there is only so much to go around.

The kidnapping of more than two hundred schoolgirls in Nigeria moved the world. We learned the story of a community that lived under the oppressively violent group Boko Haram, and voices around the world joined Nigerians in the cry to #BringBackOurGirls.

The world recoiled in horror as ISIS operatives executed innocent journalists, humanitarian workers and others by beheading them on camera.

More recently, cameras captured the violent assault on the French magazine Charlie Hebdo and more than 1 million French citizens marched in the street in an act of defiance against those who would silence freedom of speech with fear. Many people around the world have taken up the cry #JeSuisCharlie as a way to show support for the French.

In the meantime, the violent tragedies seem to multiply on the global stage more rapidly than news cameras can capture them or than social media campaigns can advocate for them.

Nearly 200,000 have been killed in the civil war in Syria, almost 9,000 of them had not reached adulthood. This weekend alone, 2,000 were killed in a Nigerian village, and we’ve learned that 10-year-old children were used as human bombs. Unfortunately, you know I could go on.

It isn’t that these things necessarily go unreported. It just seems that they happen with greater frequency than our emotions can process and our attention can attend.

So perhaps my question isn’t so outlandish. If blood falls to the ground, but there is no one there to report it, no global social response to it, does it mean that the life has no value?

I’m here to say, no. Every life has value. If the value cannot be measured by the number of those who march or mourn or who are moved to make a hashtag on its behalf, it can ultimately be measured by the fact that the Originator of all life on our planet is the Witness to every drop of blood that falls to the ground.

Just as the Creator bore witness to the first drop of blood shed in hatred and anger (over a religious dispute, mind you) there has never been a drop shed since that has escaped the watchful eye of God.

For those of us who have come to love God deeply and have determined to love what God loves, we must too be witnesses to each drop that cries out from the ground and we must pray.