Human Rights Get a “New Look” 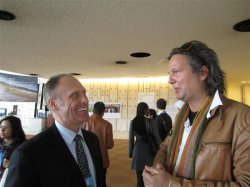 How can you communicate basic human rights in a way that’s powerful, graphic, and which breathes life into words that sometimes sound like just dry legal jargon?

The “Human Rights Project,” a photographic exhibition unveiled last month at the United Nations in Geneva, transforms the world’s most famous human rights document into potent images, which capture the ongoing, global fight to promote and protect human dignity.

The ceremony, held on the opening day of the 16th Session of the Human Rights Council, introduced both the artwork and the artists. Standing to the side of the podium, listening to the speeches from Austrian and South African dignitaries, were the three individuals whose photographic art has captured the essence of each of the 18 Articles of the Declaration of Human Rights.

Towering above his two fellow artists, Julian R. Hauser and Laurent Van Wetter, was Lukas M. Hüller—the Austrian photographer whose career has shown he is not afraid to take on controversial projects. He is perhaps best known for The Seven Deadly Sins project prior to taking on the assignment of illustrating the Articles of the Declaration of Human Rights.

“It occurred to me,” he said, “that for years the Roman Catholic Church has used symbols to convey its teachings. And it was the same for all people groups, from the poor to the king; the image remained the same. So I thought, ‘Why don't the UN use images in conveying the meaning of the Articles of the Declaration of Human Rights.’”

For the 130 million people globally who can neither read nor write, this photographic series can open up new worlds of meaning, and provide a unique way to teach that every person has the right to a life of dignity and freedom.

For advocates of religious freedom, such as the International Religious Liberty Association, the photographic representation of Article 18 (“Freedom of Religion”) is especially significant. The Article 18 photo depicts eight South African boys with their painted backs facing the camera, as they look out of an ancient cave toward a green field with mountains on the distant horizon.

The cave, located in South Africa’s Draakensberger region, is not a usual stop-off point for tourists. Inside it contains a number of drawings made by ancestors of local people to explain their own faith. For many who live in the area, it’s a sacred place. The boys’ backs have been painted as well—with drawings that are perhaps more “modern” than those on the walls of the cave. The effect almost implies that the drawings from the caves are about to advance across the field to the outside world.

“We found this cave by accident,” explained Hüller. He was on an extended stay in the country and was using the creativity of children to illustrate each article of the Declaration. The artists used a formulaic creative process to decide how to communicate each article. They explained to the children the message of each article, and asked them to try to convey this central idea through their play.

But Article 18, on the Freedom of Religion, was different—it found itself.

“We had another concept for Freedom of Religion,” Hüller told me as one of his collaborators on the project, Juliane R. Hauser, listened to our conversation. “But it involved a site in a tourist region and when we saw it, we did not feel it was what we were looking for. We heard about a cave with ancient paintings and asked to be taken to it. When we got there we were followed by a group of young boys who were curious as to what we were up to.”

An older boy was there and was able to explain to his younger friends what the visit of the Europeans with their cameras was all about. Looking outside of the cave to lush green field and the mountain in the distance, the artists were convinced this was what they were looking for. Armin Guerino, an Austrian painter who had been invited to join in thehumanrightsproject.org, was with them, and he suggested they could paint some spiritual symbols on the backs of the boys and have them look out of the cave towards the field. But there was a problem—no paint.

So they thanked the young lads for their willingness to assist, but said they’d be back another time with some paint. However, the boys had a solution to the conundrum. Not too far away was a creek and they led the foreigners to the waters’ edge and in about ten minutes they had the needed paint.

“They crushed a number of rocks together to create the coloured paste,” Juliane recounted. She still marvels at how it came together. “Armin painted the symbols using the work of the boys and we had the picture.”

Lukas added that the purpose of the symbols was not to convey representations of particular religions or religious groups. “In history, religions were a cause to wars and they still are,” he explained. “This work is to get beyond the prejudice. We are all equal no matter what our beliefs and conscience—an open field representing an open mind.”

You can find more on this special UN project at:  thehumanrightsproject.org  [Barry Bussey/IRLA]