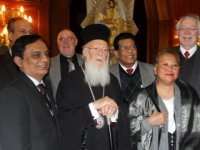 The Ecumenical Patriarch of Constantinople, spiritual leader to some 300 million Greek Orthodox Christians worldwide, met January 25 with members of the Global Christian Forum Committee at his headquarters in the historic Phanar district of Istanbul, Turkey.  Dr John Graz, International Religious Liberty Association (IRLA) Secretary General, attended the meeting, and said it provided a valuable opportunity to build good relations and raise issues of shared concern, such as promoting the free practice of religion.

“As a Christian leader in a predominately Islamic country, Patriarch Bartholomew has a special appreciation for needs of religious minorities,” says Graz.

The meeting with the Patriarch took place during a gathering of the Global Christian Forum Committee, which brought together Christian leaders representing different faith communities.  Graz says that Turkey—with its Islamic majority and Christian minorities—provided a unique background for the committee.

“The forum provided an excellent opportunity to share information about the state of religious freedom around the world,” says Graz, “and to discuss a cooperative approach to shared challenges.”