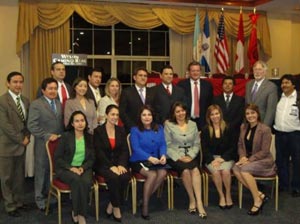 Guatemala held its First Religious Liberty Congress along with other related activities on March 24 to 27, 2010. All events were organized by the International Religious Liberty Association (IRLA) of Guatemala.

The first of those activities was a breakfast with the Guatemala Association of Christian Lawyers and Notaries. John Graz, IRLA Secretary-General, James Standish, Deputy IRLA Secretary General, and Roberto Herrera, the IRLA director for the Inter-American region, were the special guests who presented lectures on freedom of conscience.

During the Juridical Congress both Dr. Sergio Morales and the Honorable Roberto Alejos were honored with the insignia of the International Religious Liberty Association of Guatemala along with leaders of the National Bar who were co-organizers of the Congress.