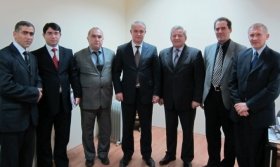 Adventist representatives and officials from the State Committee on Religious Associations met to discuss the status of Adventist congregations under Azerbaijani law.

Seventh-day Adventists in Azerbaijan hope a recent meeting between church leaders and state officials will ease tensions and help the church gain official recognition for its congregations under Azerbaijani law.

The January 31 meeting with representatives of the Azerbaijan State Committee on Religious Associations came a month after reports that government officials disrupted an Adventist worship service in the city of Sumgait, questioning worshipers and confiscating DVDs and literature.

The tone of last week’s meeting was both positive and professional, reports Vasiliy Stolyar, vice president of the Adventist Church in the Euro-Asia region, who attended along with three other local church leaders. He says the state representatives “confirmed their belief that the Seventh-day Adventist Church is a law-abiding religious organization,” and offered their support in helping the church work through the process of gaining registration of its congregations under Azerbaijani law.

Religious freedom is constitutionally protected in Azerbaijan, but only for groups that are accorded legal recognition. For the past eight years, local Adventists have been unsuccessful in their efforts to register the Sumgait congregation.

Dr John Graz, Secretary General of the International Religious Liberty Association, says the meeting represents a step forward in the ongoing struggle for substantive religious freedom in Azerbaijan. “This is a positive development,” he says. “We’re hopeful it will signal a greater commitment on the part of the Azerbaijan government to protect the freedoms of all its citizens to practice thei faith, no matter what their religious tradition.”