Canada’s First Ambassador to the Office of Religious Freedom 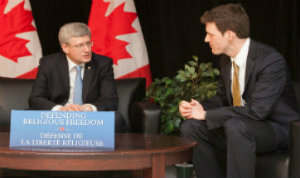 On February 19, 2013, Canada’s Prime Minister announced the appointment of Canada’s first Ambassador for Religious Freedom. The Right Honourable Stephen Harper made the announcement at the Ahmadiyya Muslim Mosque just north of Toronto, Ontario. In attendance were 800 of Canada’s religious leaders, representing every major faith group in the nation.

In attendance from the Seventh-day Adventist Church was General Counsel to the Church, Grace Mackintosh, and It Is Written Canada Speaker, Bill Santos.

Ambassador Bennett is a public servant and academic with an extensive educational background in history, political science, and religious studies. He received his doctorate in political science from the University of Edinburgh in 2002.

Ambassador Bennett has worked for the Canadian Privy Council Office, Export Development Canada and Natural Resources Canada and has held roles as Professor and Dean at Augustine College in Ottawa. He is also a religious leader in his capacity as Subdeacon and Cantor with both the Holy Cross Eastern Catholic Chaplaincy and St. John the Baptist Ukrainian-Catholic Shrine, both in Ottawa, and as Vice-President and Chairman of the Metropolitan Andrey Sheptytsky Institute Foundation.

Canada’s new approach to foreign policy was highlighted by Canada’s Foreign Minister, the Honourable John Baird at a Religious Liberty Dinner held by the International Religious Liberty Association, Liberty Magazine and the Seventh-day Adventist Church at the Canadian Embassy in Washington D.C. on May 24, 2012. At the dinner, Minister Baird was honoured for Canada’s work on behalf of religious freedom internationally. During the Dinner, Minister Baird said:

“So I’m proud to say Canada no longer simply “goes along to get along” in the conduct of its foreign policy.

We will stand for what is principled and just, regardless of whether it is popular, convenient or expedient.

We do so as part of our commitment to basic rights for all.

There is special purpose in defending the freedom of religious belief and practice. History shows us that religious freedom and democratic freedom are inseparable.

As President Franklin Delano Roosevelt observed on the eve of global war:

“Where freedom of religion has been attacked, the attack has come from sources opposed to democracy. Where democracy has been overthrown, the spirit of free worship has disappeared. And where religion and democracy have vanished, good faith and reason in international affairs have given way to strident ambition and brute force.”

They are typically more stable and more prosperous.

That is why religious freedom is front and centre in foundational documents such as the UN Declaration of Human Rights and both our countries’ bills of rights.

This view has been reinforced in consultations we have held across Canada and around the world as we plan for our own Office of Religious Freedom.”

There can be no doubt about Minister Baird’s commitment to this message. Over the last year, Minister Baird has taken a strong public stand against religious oppression wherever it may occur:

Sudan – “Sudan, a country with a terrible human rights record, has sunk to new depths of cruelty, have carried out amputations on a man convicted of a criminal offence.”

Nigeria – “In the last three years, the terrorist group Boko Haram has killed thousands of People in Nigerian markets and in the offices of media organizations, as well as in churches and other sacred places.”

Iran – “Women, Christians, Bahá'í are victims of persecution in Iran.”

Syria – “Canada would not simply “go along” or look else where when the Assad regime started killing men, women and children in a despicable and desperate attempt to cling to power.”

Pakistan – “Canada recommends that Pakistan: (1)  Adopt measures to ensure the protection of religious minorities, including Ahmadis, Christians, Hindus and Sikhs, prevent the abuse of blasphemy legislation, halt forced conversions, and take necessary steps to prevent violence against members of religious minority communities. (2)  Take steps to implement laws and policies with a view to eliminate early and forced marriage. (3)  Take steps to bring to justice those who have threatened, or attacked human rights defenders, children, and others who are working to promote democracy and accountability in Pakistan.”

Egypt – “Copts are being assaulted and killed in Egypt.”

China – “Roman Catholic priests and other Christian clergy, and their laity are, driven to worship underground in China.”

Iraq – “Christians are being driven out by Al Qaeda.”

Burma – “In Burma, the regime discriminates against several forms of Buddhists and restricts the activities of Muslims.”

Uganda – “Gays and lesbians are threatened with criminalization for their sexuality in Uganda.”

It is anticipated that the new Ambassador for Religious Freedom will greatly expand the work and impact of Canada in fighting against religious bigotry, discrimination and oppression.

Gerald Chipeur, Q.C., practices constitutional, administration and health law in Canada as a partner in the firm of Miller Thomson, LLP.