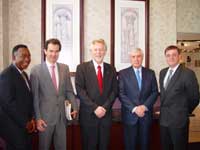 A long-time defender of the principles of religious liberty, Ambassador Javier Ruperez from the Embassy of Spain in Washington, D.C. visited the headquarters of the International Religious Liberty Association April 19.

In conversation with IRLA officers, Ruperez summed up his convictions. He had written a highly-significant book on the situation in Spain in 1970 entitled, “Confessional State and Religious Freedom.”

Commenting on the situation at that time, he said that “the imposition of religion on all was wrong, not just for state, but also for fundamental freedoms. It is not enough to recognize religious freedom; we have to obtain the same recognition from others.” 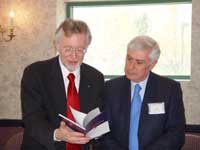 Speaking in the aftermath of the terrorist bombings in Madrid, Ruperez commented, “In order to achieve religious freedom, we need to ask for the respect of beliefs of others. All violence in the name of God should belong to the past. We should be vigilant in demanding respect by others for the freedom we proclaim—otherwise we could go back to the Dark Ages. We have been under assault by people who believe they can kill others in the name of God. I believe very, very strongly that such a view must be rejected.”

In his conclusion, Ruperez observed, “After all the toil of centuries we can become lost in a quagmire where there is no mutual respect. It becomes a question of being willing to die for religious freedom.”

Responding for the IRLA, Secretary General John Graz states that “the commitment of the government of Spain and especially Ambassador Ruperez to religious freedom is to be highly commended. We greatly value the material support voted to the IRLA and its Board of Experts meetings by the Spanish government that has enabled the production of such important documents as “Guidelines on Responsible Proselytism”. The example of Spain for the cause of religious liberty is worth being adopted by many other states, and we extend our grateful thanks.” [Jonathan Gallagher]