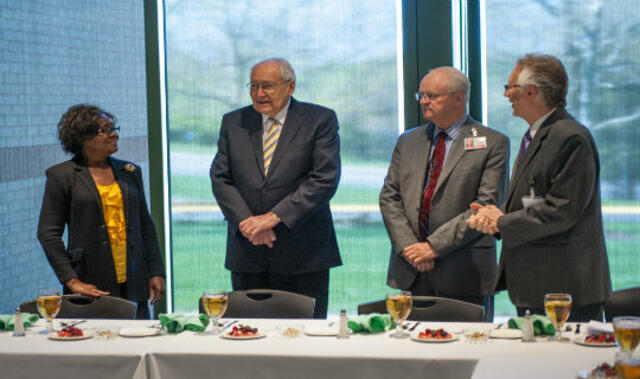 Top leaders of the Church of Jesus Christ of Latter-day Saints offered a preview of an upcoming social media campaign in a visit last week with leaders of the Seventh-day Adventist Church headquarters, a meeting that underscored each denomination’s commitment to religious freedom.

The forthcoming “Faith Counts” media campaign of the Latter-day Saints—also known as the Mormon church—is one that encourages people to seek religious faith, leaders of that denomination said. Short, professionally produced videos show how pursing faith has impacted people across society.

“We’ve got to find a way to keeping faith alive in the 14- to 35-year-olds so that faith will grow with them, so they’ll have a foundation for their life,” said L. Tom Perry, who is a member of the Quorum of the Twelve Apostles of the Mormon church.

A preliminary video for Easter, titled “Because of Him,” was viewed more than 5.3 million times within a few weeks. “The goal is the provide content for our Millennial friends, so they can take it and pass it along,” Perry said.

Perry said the campaign was launched to counter what he sees as a waning of spirituality throughout society. The campaign will launch within a month.

During the meeting, leaders from both denominations pledged to continue promoting religious freedom in the face of what they see is an increasing marginalization of people of faith and the concept of freedom of conscience. The Adventist Church maintains its key sponsorship of the International Religious Liberty Association, and the Mormon church operates the International Center for Law and Religion Studies at Brigham Young University, which is the flagship educational institution of the Mormon church.

“In a world that needs more faith, more focus on family, and now a defense of religious freedom, we are trying to join with people of good faith like you to help fight these very basic battles that are going on in the world,” said Ronald A. Rasband, senior president of the Mormon church’s Presidency of the Seventy.

General Conference Vice President Lowell Cooper said Adventists honor the Mormon church for its “public discourse” of its beliefs and values. “We have found that it’s good to have you as neighbors and partners,” he said.

The Mormon church, based in Salt Lake City, Utah, has more than 15 million members. Nearly 6.4 million of its members live in the United States, and approximately 2.6 million live in Mexico and Brazil.

Leaders at the Adventist Church headquarters periodically host national ambassadors and leaders from other religious denominations in order to build on existing relationships.